The Impact of Starches — a Hispanic Culinary Staple 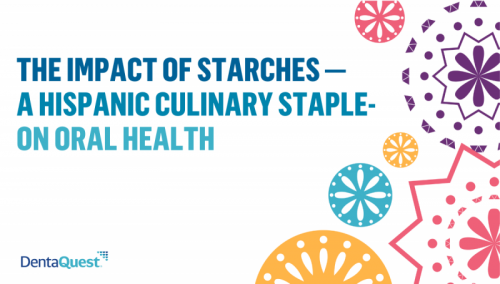 September 15 marked the beginning of Hispanic Heritage Month, which honors the cultures and contributions of Hispanic Americans and commemorates heritage rooted in Latin American countries. Food is always a central component of cultures, and more likely than not, you’ve enjoyed the traditional cuisine of many Latin American countries. But what many people may not realize is that a diet filled with traditional Hispanic and Latin foods can have a negative impact on a person’s oral health.

When you think about your favorite Hispanic and Latin foods – rice, potatoes, tortillas – they have a lot of carbohydrates and starches, which can lead to increased tooth decay and periodontal issues.

Dr. Daniel Dorrego, a dental consultant at DentaQuest, gave us insight into the impact these ingredients have on the oral health of the Hispanic population.

“The typical Hispanic diet is heavy in starches,” says Dorrego. “Rice, taro, yuca, malanga — all these grains and root vegetables are staples in every Hispanic household and none of them positively impact a person’s oral health. It’s actually the opposite.”

When you eat starchy foods, you’re feeding the bad bacteria in your mouth that can cause tooth decay and gum disease. Research shows that dental hard tissues are demineralized by acidic by-products produced by bacteria in biofilm — aka dental plaque — via fermentation of dietary carbohydrates. To simplify, when the sugars or starch from carbohydrates come into contact with dental plaque, acid forms and begins to attack your teeth.

Let’s take a look at the numbers. According to the CDC, for children ages 12 to 19, nearly 70% of Mexican-American children have had cavities in their permanent teeth, compared with 54% of non-Hispanic White children. One in three adults age 65 or older who are Mexican American have untreated tooth decay, which is two to three times the rate in untreated cavities as older non-Hispanic White adults.

To decrease some of the poor oral health outcomes prevalent in the Hispanic and Latin community, Dorrego says it comes down to two things: education and moderation.

First, he emphasizes that it’s important to educate the Hispanic population on good oral health practices, including the importance of preventive care, and communicate why this diet puts them at higher risk for oral health issues.

“You don’t have to give up your favorite cultural foods,” Dorrego says. “It’s about moderation. I still enjoy my favorite foods that I grew up with – like fried plantains – but now I treat them as a celebratory treat rather than a regular part of my diet.