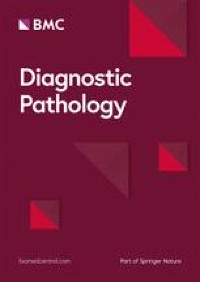 EMCs were first defined as a class of solid tumors by Enzinger and Shiraki [1], and they constitute < 1% of all soft-tissue sarcomas [2]. EMCs are commonly seen in male adults, with a mean age of onset of 50 years. Lesions are most frequently found in the deep soft tissues of the proximal extremities, especially the lower extremities; however, in some cases, EMCs can also affect the trunk, head and neck, abdominal wall, paravertebral soft tissues and bones [7,8,9,10].

Histologically, EMCs can be categorized into classical EMCs and two variants, cellular EMCs and solid nonmyxoid EMCs [11]. The tumor cells, in this case, had a nodular structure and infiltrated the peripheral fat and muscle tissues. There were abundant fibrous tissues between the nodules, most of which were identified as solid nodules (> 90%) comprised of round or fusiform cells. The tumor cells were uniform in size and had round nuclei with well-defined nucleoli and eosinophilic cytoplasm, and their nuclear fission was 2/10 HPF. The nodular structure partly resembled that of classic EMCs, but the tumor cells were loosely arranged, forming reticular or crosswise layers in the myxoid matrix. Local necrosis was observed. Diagnosing EMC is extremely challenging because of the lack of specificity in their morphological features [12]. Many soft tissue tumors have similar morphology to EMC. The main differential diagnosis includes cellular EMC, proximal-type epithelioid sarcoma, extrarenal malignant rhabdoid tumor, epithelioid angiosarcoma, malignant solitary fibrous tumor, extraosseous Ewing’s sarcoma, desmoplastic small round cell tumor, metastatic dedifferentiated chordoma, poorly differentiated synovial sarcoma and epithelioid malignant peripheral nerve sheath tumor. IHC staining plays an essential role in the diagnostic process. In this case, the IHC staining results suggested that the patient’s tumor was diffusely positive for CD117, vimentin, CD56 and NSE and focally positive for desmin, negative for other markers, and had a ki-67 level of ~ 40%. Despite the effectiveness of IHC staining, a definitive diagnosis of EMC cannot be made solely from positive IHC results for CD117, vimentin, CD56 and NSE as specific markers; however, IHC provided a diagnostic clue, and NGS was performed on the tumor. An EWSR1 exon 7-NR4A3 exon 2 fusion was subsequently identified. Thus, a diagnosis of cellular EMC was confirmed by considering the combined results of the morphological, immunophenotypic and molecular analyses. A recent study [13] reported positivity for INSM1 in up to 90% of EMC cases, which is considered evidence for the neuroendocrine differentiation of EMC cells; however, INSM1 expression was not detected in this case. In terms of molecular genetics, EWSR1-NR4A3 fusion products are detected in approximately 62–75% of patients with NR4A3 rearrangement [4,5,6]. Other studies have reported HSPA8-NR4A3 translocation [14], a novel t (2;22) (q34; q12) EWSR1 translocation [15] and SMARCA2-NR4A3 fusion [16].

Interestingly, along with the EWSR1 exon 7-NR4A3 exon 2 fusion, NGS detected KIT exon 13 mutations; moreover, it was noted that the IHC staining results demonstrated strong diffuse expression of CD117. Only a few studies have discussed the role of evaluating CD117 positivity and KIT gene alterations in EMC diagnostics. Hornick and Fletcher [17] reported that 2 of 20 patients tested positive for CD117, but did not investigate the KIT gene. Subramanian et al. [18] conducted IHC and ISH (In Situ Hybridization) tests, revealing that 6 of 11 EMCs were diffusely positive for CD117,KIT exons 9, 11, 13 and 17 were screened for mutations in the diffuse positive cases (6/11), and the results suggested indicated no mutations. The IHC staining results in the study by Stacchiotti et al. [19] suggested the presence of CD117 expression in 6 of 9 EMCs cases, however, no KIT gene analysis was conducted. Subsequently, Urbini et al. [20] reported the case of an EMC patient (1/20) with KIT exon 11 mutations, which, apart from the case presented in this paper, is firstly reported EMC case with KIT gene mutations; however, no IHC staining results were conducted. In the present case, the presence of KIT exon 13 mutations was established based on NGS and morphological findings, i.e., abundant tumor cells, scarce myxoid stroma and strong diffuse expression of anti-CD117 antibody in tumor cells. We hypothesize that CD117-positive (CD117+) cellular EMCs might have a higher frequency of KIT gene mutations. EMC subtypes were not elaborated in the abovementioned studies on patients without KIT gene mutations who tested positive for anti-CD117 antibodies or those with KIT gene mutations identified before anti-CD117 antibody testing. Moreover, to the best of our knowledge, no study has explored the association between anti-CD117 antibodies and the KIT gene and EMC subtypes. Therefore, it is necessary to study more EMC cases positive for anti-CD117 antibody expression and cellular EMC cases positive for CD117 expression.

In gastrointestinal stromal tumors, the location of KIT mutations is associated with tumor biological behavior, and exon 11 and 13 mutations provide evidence regarding the tumors’ malignant biological status [21]. KIT exon 13 mutations are relatively rare, accounting for 0.8–4.1% of all KIT mutations, and patients with KIT exon 13 mutations benefit from sunitinib therapy [22]. A patient with EMC who had KIT exon 11 mutations and had not previously received sunitinib was reported to benefit from sunitinib therapy [20]. However, Brooke et al. [23] reported that stable disease was maintained with imatinib treatement for 3 years in a 55-year-old woman diagnosed with EMCs with KIT exon 11 mutations. In the present case, the patient had KIT exon 13 mutations but was not administered sunitinib; therefore, whether sunitinib would benefit this patient remains unclear. The 10-year survival rate was 70% among the patients with EMCs, and the prognosis of EMCs was not associated with histological grade or proliferative markers but with the location and size of the tumor in elderly patients [24]. At the time of writing, follow-up on the present case had been conducted for only ~ 10 months; thus, the significance of the follow-up results is limited. We will continue to follow up with this patient.